You are here: Home / Archives for Uncategorized

Recently the original 1894 Trust Deed for the “Nuevo” Town Hall was discovered in a safe deposit box that had been undisturbed for nearly 4 decades. Here is a scan of the document: 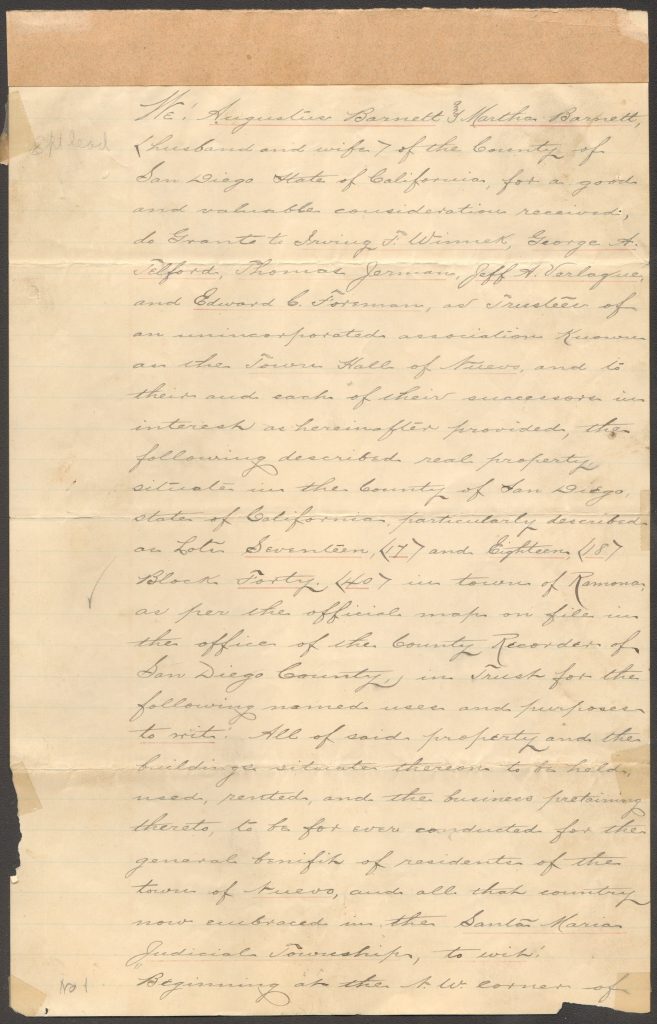 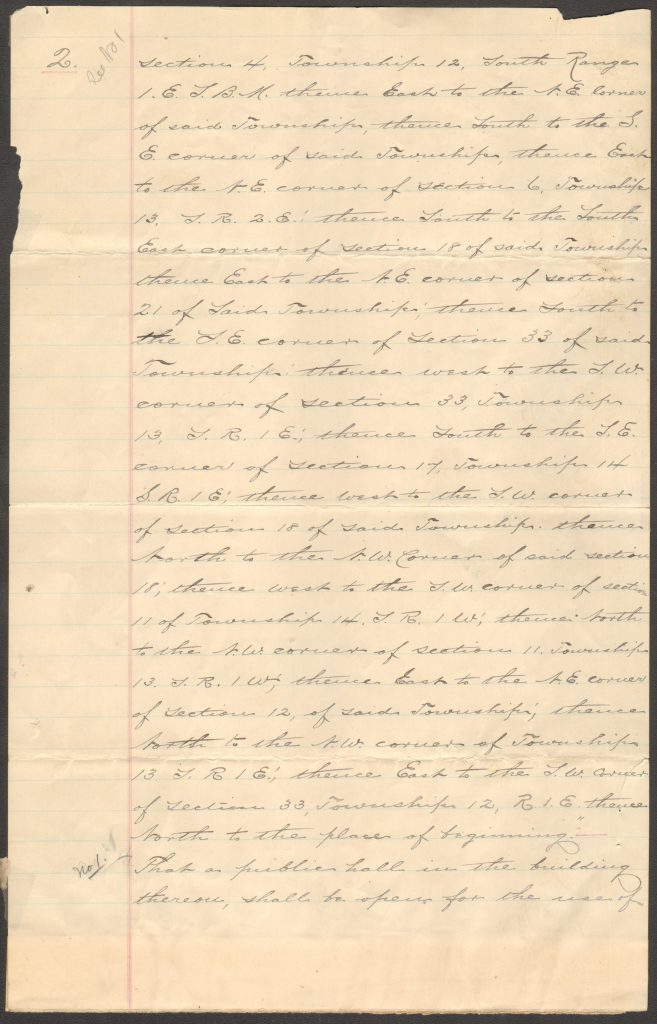 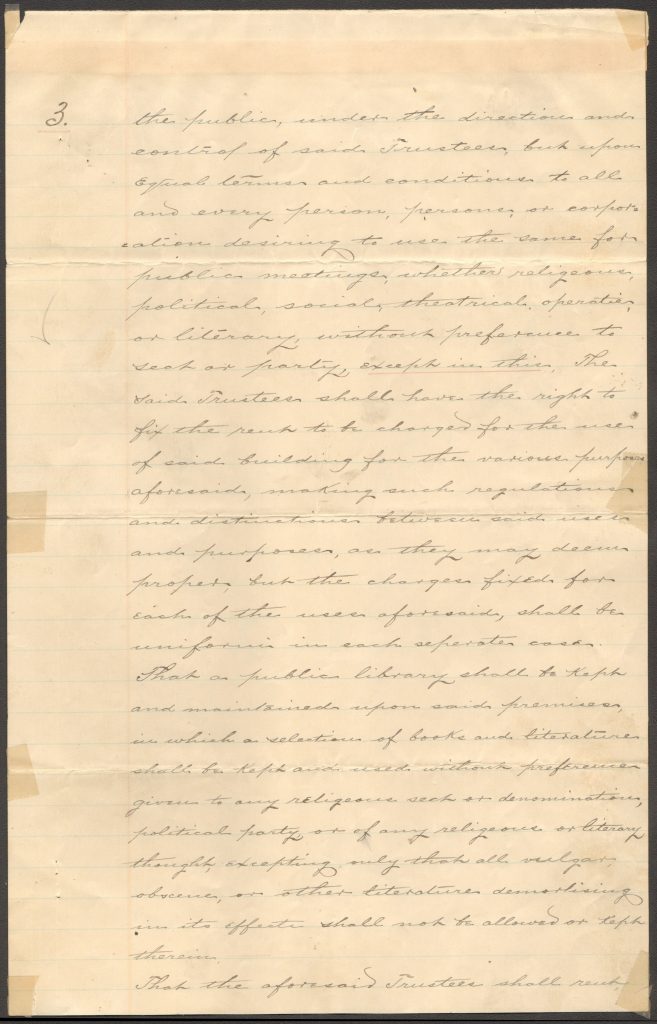 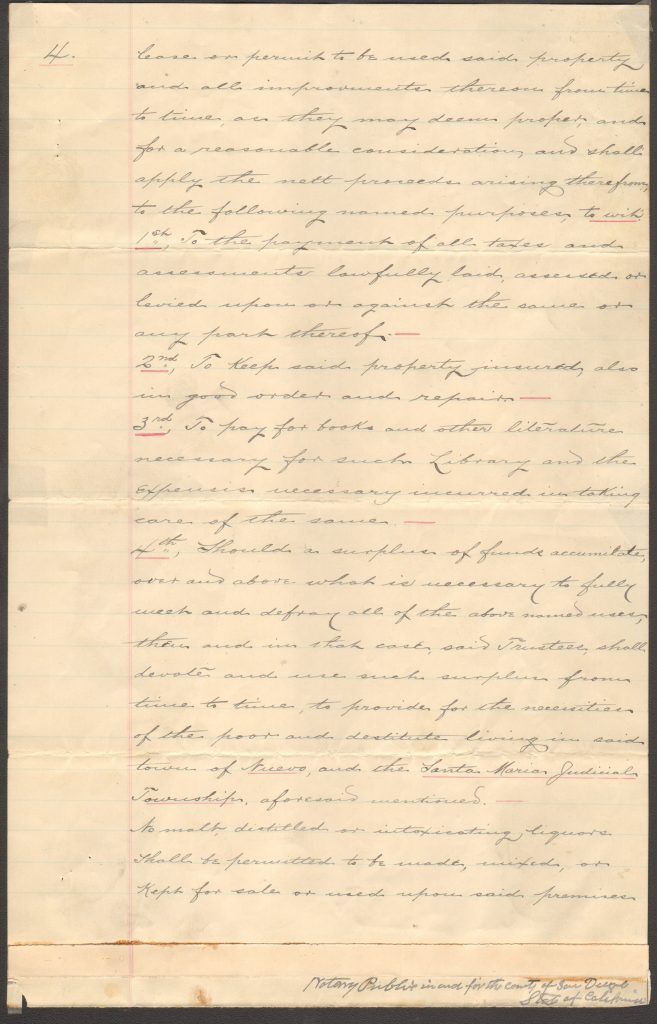 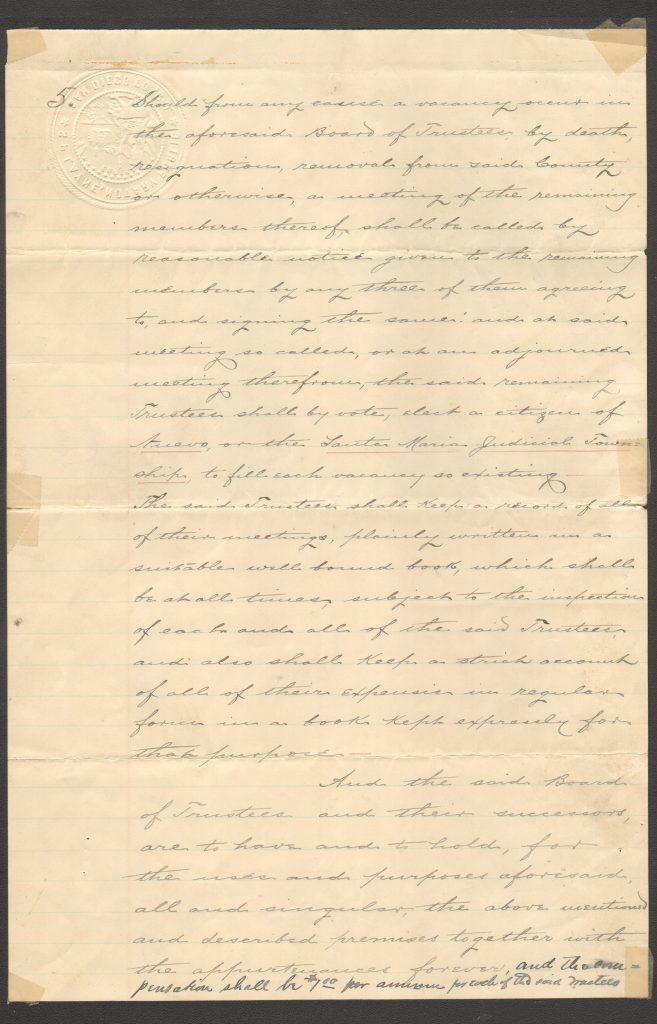 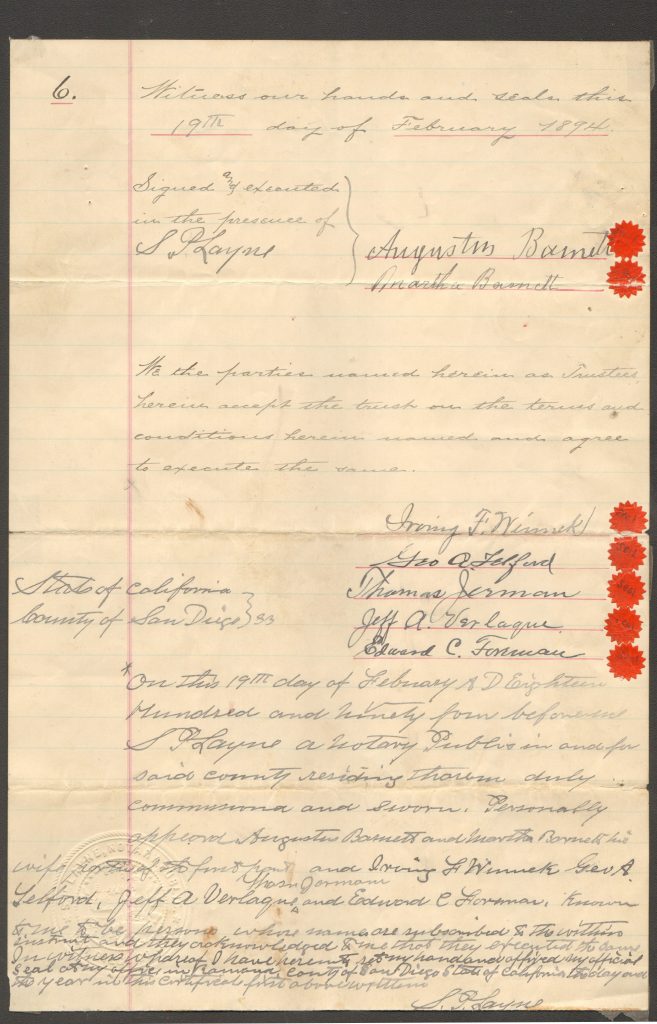 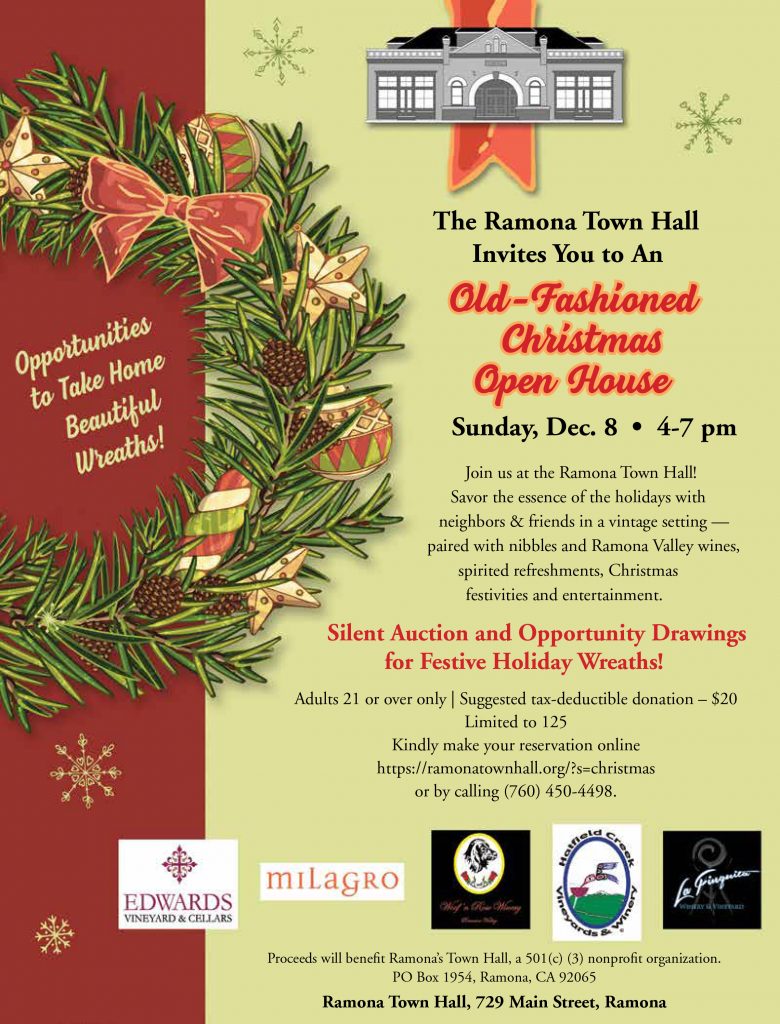 Click the Donate button below to make a donation and reservation, or email us at restore@ramonatownhall.com 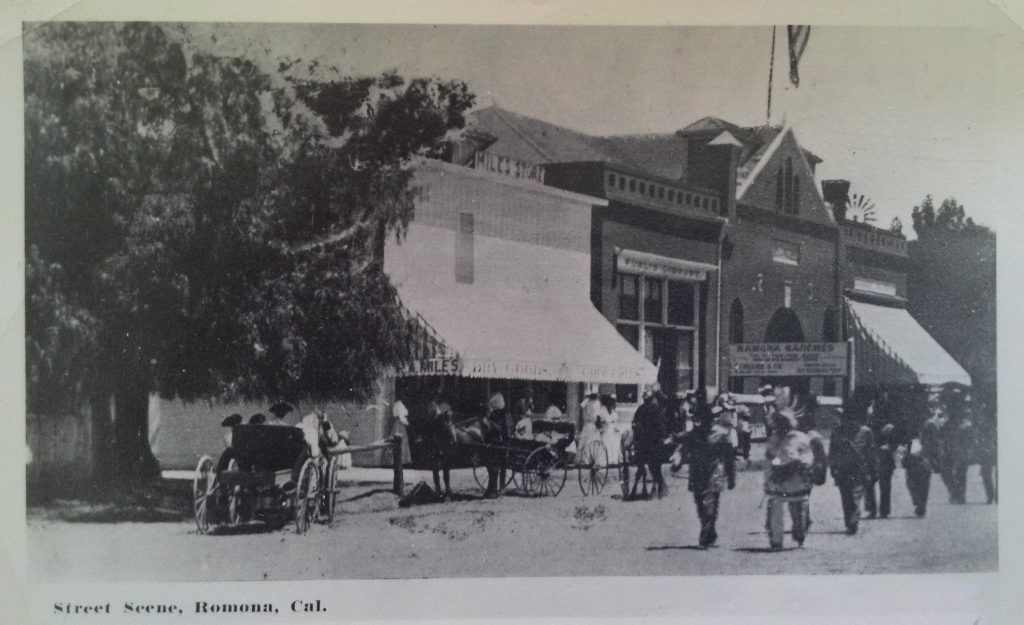 The following is a factual report regarding the use and purpose of the Ramona Town Hall and the changes it has undergone since its inception.

According to the original record book of the Ramona Town Hall dated February 19, 1894, Augustus and Martha Barnett, husband and wife, of the County of San Diego, State of California for a good and valuable consideration perceived, do grant  to Irving F. Winnick, George A. Telford, Thomas Jerman, Jeff A. Verlaque and Edward C. Foreman as trustees of an unincorporated association, known as the Town Hall of Nuevo and to their and each of their successors in interest as hereafter provided.

The following described real property, situated in the County of San Diego, State of California, particularly described as Lots Seventeen and Eighteen, Block 40 in the town of Ramona, as per the official map on file in the office of the County Recorder  of San Diego County, in Trust for the following named uses and purpose to wit:  All of said property and the building situated thereon to be held , used, rented and the business pertaining thereto, to be forever conducted for the general benefit of the residents of the town of Nuevo and all the country now embraced in the Santa Maria Judicial Township.   That a public hall in the building thereon shall be for the use of the public, under the direction and control of said Trustees but upon equal terms and conditions to all and every person, persons or corporations desiring to use the same for public meetings, whether religious, political, social, theatrical, operatic, or literary without preference to sect of party, except in this:  The  said Trustees shall have the right to fix the rent to be charged for the use of said building for the various purposes aforesaid, making such regulations and distinctions between said uses and purposes as they may deem proper but the charges fixed for each of the uses aforesaid shall be uniform in each separate case.  That a public Library shall be kept and maintained upon said premises in which a selection of books and literature shall be kept and used without preference given to any religious sect or denomination, political party or and religious or literary thought, excepting, only that all vulgar, obscene or other literature demolishing in its effects, shall not be allowed or kept therein.

That the aforesaid Trustees shall rent, lease or permit to be used said property and all improvements thereon from time to time as they may deem proper and for a reasonable consideration and shall apply the net proceeds arising therefrom to the named purposes to wit:

1.  To the payment of all taxes and assessments lawfully laid, assessed or levied upon or against the same or any part thereof.

3.  To pay for books and other literature necessary for said library and the expenses necessary incurred in taking care of them.

As of record in the original book of the Town Hall minutes up and including the year 1958 there had been a total of 30 people who had served as board members.  The first board members appointed by Mr. Barnett were Irving F. Winnick, George A. Telford, Thomas Jerman, Jeff Verlaque and Edward C. Foreman, all who were appointed February 22, 1894.

Thomas Jerman served the longest time on the board.  He passed away February 7th, 1920.  He owned what is now the Rexall Drug Store at 7th and Main Street, known at that time as “Jermans Drug Store” which had within its confines, drugs, hardware, soda fountain, horse collars and other items used by ranchers.

The first meeting of the board of Trustees was held on February 26, 1894.  the first order of business was to elect their officers as follows:

A committee was formed to write a set of Bylaws and set up a Library.  $2,500 was decided upon.  Insurance $2.04 per year.  $2.00 per week was decided to charge for a dancing school that was to be established.  The following month it was decided to hire a janitor for $5.00 per month.  Duties included policing the dances, sweep all the buildings, keep dust out of the windows, stay till all performances were over and put out the lights.

Dr. Halbar was appointed Librarian and for his pay he would receive free rent for his office on the west side of the main hall entrance.

January 15, 1895–Three churches wanted to rent the Hall.  The Town Hall Board had to divide their time equally.  The rent to be paid in advance at $1.10 per Sunday and to be paid promptly.  The Library was set up and books and magazines were ordered which totaled 17 in all.

March 1, 1895 –The upper part of the Town Hall was leased to the High School for two years.  A total of 20 students were in attendance.  No price was reflected in the minutes of the board.

July 17, 1896 –James A. Jasper, publisher of the Sentinel newspaper, is appointed by unanimous vote to replace Trustee Edward C. Foreman, (removed from Ramona.) The Foresters Lodge rented upstairs room for $1.00 for each meeting night, including chairs but furnished their own lights.

November 16, 1897 –Librarian and Janitor discontinued for lack of funds.

April 29, 1899 –The following rates were adopted for the rent of the hall, until midnight $3.00 — All night $5.00  — These rates were to be charged when an admission was charged at the door.  When educational or other entertainments with no admission charged, the rental was to be $1.50 for the evening and $1.00 for day time use.  All political meetings till midnight $5.00, if dance afterwards $2.50 extra.  Store room and supplies for lunch $2.50 extra.  Dances given by Trustees $5.00 and no exceptions.

January 6, 1901 –A Barber Shop and Fountain was to open next to the Library by Robert Green, and pay 20% of his receipts to the Library.

March 30, 1901 –A resolution passed, anytime a member absents himself from 3 of our regular meetings without just cause, he shall be asked to resign, at which time the meetings were changed from 4 o’clock to 3 o’clock P.M. on the last Saturday of each month.

April 27, 1901 –Library was calcimined and woodwork was varnished.

August 31, 1901 –Moved the monthly meetings be done away with and yearly meetings be held hereafter, only by special call for meeting otherwise.  Barber Shop rented for $1.50 in West Office room.

August 20, 1904 –The Board took up the matter to have the property of the Town Hall transferred to a Library Association to be formed and incorporated.

February 23, 1907 –It was decided only one practice be allowed before each entertainment.

February 24, 1909 –Office rent for room next to Library raised from $2.00 to $3.50 per month.  Voted to buy chemicals for the two wheeled fire engine and build a shed for it on the east side of the hall.

Nothing of interest was noted between 1909 and 1917.  Just opened and closed the meetings.

February 26, 1917 –A Mr. Cuming offered to rent upstairs for $50.00 per year paid in advance if the stairwell and upstairs was put in safe condition.  All materials furnished by Town Hall Board and work to be done by the Lodge.

March 3, 1922 –Ms. Amy Strong is the first woman appointed to the Town Hall Board.

April 9, 1948 — Final details on the remodeling of Town Hall.  Bruce Telford was hired as foreman.

October 21, 1958 –The Ramona Town Hall at this time was in good repair and free of indebtedness.  The present board had served for several years and thought it should step out and install a new Town Hall Board of Trustees.  Mrs. Garnett Eller is the second woman appointed to the Town Hall Board.

October 22, 1968 –Set of bylaws adopted and approved by County tax assessors office as meeting the requirements for tax exemption.

November 1969 –Palomar Branch of Y.M.C.A. takes over by quitclaim deed to the Ramona Town Hall.

1969 to 1976 –The Y.M.C.A. had control of the Town Hall, at which time it became in a run down condition.  After much work on the part of the present Board, it was brought back under control of the local people and was incorporated.  At the present time the Town Hall is being used by the Teen Center in the west wing.  The Art Loft, a group of local artists have the east wing.  The Chamber of Commerce occupies the east office room.  The Community Theatrical groupe is using the main hall.  The Ramona Pioneer Historical Society will be using the main hall for its regular meetings.

For the eighty three years the Town Hall has been in operation, there has been more than two dozen different types of enterprises conducted within its confines.

The grand old building is now in the process of undergoing a general overhaul of the electrical system, plumbing, painting inside and out.  Installation of security measures to the doors, windows and a wrought iron gate in the main entrance.  All possible from a grant obtained from the Comprehensive Employment Training Act for the sum of $45,000.00.  At the present time, (October 1977,) the following are members of the Board of Trustees: